Today we reached a milestone with WebKit/GTK+ as it became the first browser engine on Linux/X11 to get a full score on Acid3, shortly after the Acid3 pass by WebKit for Safari/Mac. 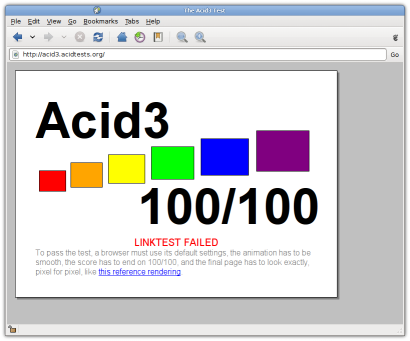 There is actually still a little work to be done before we can claim a flawless Acid3 pass. Two of the most visible remaining issues in the GTK+ port are :visited (causing the “LINKTEST FAILED” notice in the screenshot) and the lack of CSS text shadow support in the Cairo/text backend which is needed to match the reference rendering.

It’s amazing to see how far we’ve come in the last few months, and great to see the WebKit GTK+ team now playing an active role in the direction of WebCore as WebKit continues to build momentum amongst developers.