After a weekend hack session with Øyvind Kolås, I got WebKit/GTK+‘s Cairo backend rendering straight to OpenGL with Cairo’s new OpenVG backend and ShivaVG: 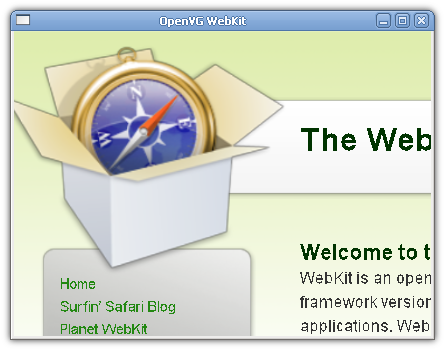 At first the colours were a bit off and performance was nothing to write home about. But Øyvind promptly pushed a fix and cooked up a patch to prevent static images being re-uploaded, and things started to fly.

The performance boost is most noticable for SVG and Web pages with large, animated graphics and dynamic content. We’re looking at full repainting is in the hundreds-of-FPS range.

I then turned my attentions to accelerating the canvas element. WebKit/GTK+’s canvas is already the fastest free implementation around, but traditional approaches to rendering the canvas will only get you so far. 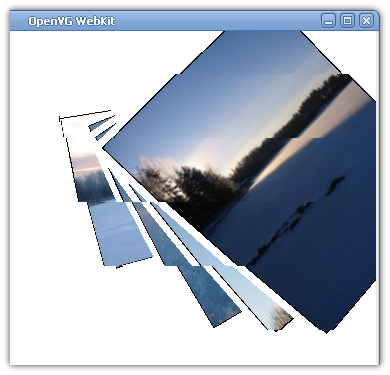 (The screenshot was caught during a GL buffer swap, it’s all very smooth in reality.)

Accelerating the canvas was slightly tricky since canvas makes some assumptions about image data, but as we see here it’s quite possible to make it go fast.

Patches should start to appear on #16885. There’s work to be done to improve rendering quality, get text smoothing back etc., but it’s a start.

This feature can be used both to acelerate WebKit/GTK+ and in a standalone configuration with only a GLib dependency, as requested by Linden Lab who are looking at integrating WebKit into their virtual 3D environment.

It should also be usable with the brand new Cairo-based WebKit Windows port (#16979) that’s on its way.

← Advances in Web typography
WebKit for Windows gets Cairo support →