WebKit/Gtk+ gets a reviewer, and Canvas support

I am now an official WebKit reviewer. This should help speed up development of the Gtk+ port. Thanks go to Apple and the WebKit team! 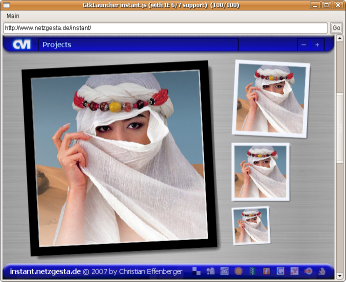 A few hours ago I landed support for the Canvas HTML element, rendered using Cairo (just like everything else in the browser engine, including ordinary content and SVG graphics). This feature paves the way for significant bling, with WebKit having been the originator of the Canvas standard for use in the Mac OS X Dashboard.

This screenshot demonstrates some dynamic frame/rotation/shadow effects applied to an image on the Web.

I’ve now re-factored WebKit/Gtk+’s public API so that the types are named WebKitPage, WebKitFrame etc. This looks and feels a lot better than the old naming convention, and is part of an ongoing effort to provide an elegant and seamless GObject C API for the browser engine. I’ve also updated the Epiphany browser and the EAL wrapper to track these changes so disruption to these projects should be minimal. If you are not having fun embedding WebKit/Gtk+ in your application we’ve done something wrong!

Mark Rowe (who works at Apple) can be considered godfather of the Gtk+ port. He has provided unfaltering enthusiasm and patch review since I started hacking on the browser over a year ago, and last night stayed up till 5AM making sure the Gtk+ port worked on the upcoming feature branch. Earlier that day, he had been hacking on GdkPixbuf image and animation loading support (which has unfortunately stalled since the GdkPixbufAnimation API is something of a black box).

In other news, I’ve working on something new to move things forward (update: Nuanti) so stay tuned!

← All good things
A good week for text and graphics →