Just about two years ago when I was living in Edinburgh, university researcher Harry Halpin and I set up a space in the basement of an old church/the Forest Cafe with the goals of promoting and supporting Free Software and independent media. Within a few weeks, I’d sat down with colleague Ronan Huggard, and after an all-night brainstorming session, came up with a name for this rapidly growing organisation: InfoSeed. The name embodied the ethos of the group, which existed to sow the seeds of information, allowing technology enthusiasts and independent journalists to work together and get things done.

Perhaps the most important aspect of InfoSeed for me was that it broke the hegemony of the university in matters of computing and opened its doors to the wider community. As former president of the Edinburgh University Computing Society, I’d seen first-hand that, while our constitution did cater for non-students, university societies were simply not set up to support local Edinburgh residents and passers-by in the same capacity as they were able to accommodate students themselves. In this way, societies were a dead end to me, kind of an in-club for those who were studying at the right place at the right time. InfoSeed was my chance to get things right, second time round.

I hope to blog in the future about the history of InfoSeed including its formation around the time of the G8 Gleneagles summit, the development of excellent IT infrastructure on a shoestring budget, the software we used and wrote, the physical restoration of a dank undercroft into a warm and welcoming walk-in centre for Free Software and Open Source enthusiasts, open six days a week with scheduled opening hours, the events we hosted, and our relations with other like-minded organisations.

Then there are the stories of how we got dozens of Linux laptops to African schools, how we weaned journalists off proprietary office suites and audio/video editing software, how we showed countless passers-by that the world of computing was not incompatible with their desires for world peace, saving the whales or whatever personal aspirations they happened to have in life; that computing, programming and technology are in fact very human and social persuasions. 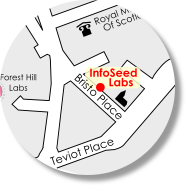 Each of these is an epic tale, and would ideally only have been the first chapter of a much greater work. However, unless something changes I will have to refer to InfoSeed in the past tense since, today, I’m having to write about the imminent closure of the InfoSeed Free Software lab. If you live in Edinburgh, are studying there or have any interest in this kind of space, do drop by and check it out while you still can. Money may be most helpful (InfoSeed as an organisation is no longer able to pay the bills for the two rooms it’s based out of), but fresh blood and enthusiasm would be welcome, since with new faces and ideas there is a case for raising more funds and thus a stay of execution. The InfoSeed website and mailing list are the first points of contact if you want to get in touch.

If the doors of InfoSeed do close for the last time, it will by no means have been a failed experiment, but a great success that spread free and open computing to people who would otherwise never have heard of it, and one that has touched the lives of the volunteers who put in so much time and effort (verging on the obsessive in some cases, you know who you are!). I wonder if InfoSeed could continue function as a disembodied Internet forum, or whether its entire value — what made it a first for Scotland — was that it was a physical venue with real people willing to work together in the same place to show the world that there’s more to computing and technology than they ever imagined?